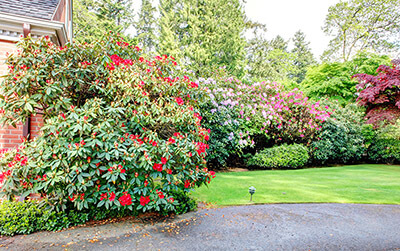 SNOHOMISH, WA: Big Trees Inc, (https://bigtreesupply.com) a tree nursery and tree transplant company in the Seattle area, was hired recently to revamp a homeowner’s entire yard, mostly by repurposing existing trees and shrubs from the property.

The established yard in an older neighborhood of Seattle had many large Rhododendrons and upright Japanese Maples. Unfortunately, they were planted all over the backyard in random spaces leaving very little open space for a lawn or play area. The homeowner did not want to lose these established specimen trees, but they did not fit into his vision of an open space where his children could play.

The homeowner contacted Big Trees about moving the trees somewhere else on the property, and after a site visit, came up with a plan. Big Trees was able to move ten large rhododendrons from the middle of the yard, to the perimeter of the property. The effect was an open backyard, surrounded by large rhododendrons mixed into existing Laurels to create a natural privacy barrier from the street. The large canopied Japanese Maples were also moved to different places in the front yard.

After all the transplanting work was complete, the homeowner also added two rows of 7′ Emerald Green Arborvitae on the other sides of the property. They now have complete privacy, an open backyard to create a usable outdoor space, and they were able to keep every valuable specimen tree that was already on their site. Not only did the repurposing save the trees, it also saved the homeowner a lot of money.

“Moving large existing trees is often more cost effective than trying to buy new trees of the same size,” said Nancy Penrose, owner of Big Trees. “This is particularly true of slow growing, ornamental specimens. New large ornamental trees can be expensive if you are even able to find them. So moving these large existing trees around on the property was a perfect solution for this homeowner.”

Nancy Penrose is the owner of Big Trees Inc., located in Snohomish, WA in the Seattle area. The company is one of the largest tree nurseries in the Seattle area with over 120,000 trees available in over 300 varieties. They not only deliver young trees, but also mature trees in a wide range of sizes. Some types of trees available include spring flowering, deciduous, evergreen, and privacy trees. The company also does tree transplanting including large trees. Their blog can be seen at https://bigtreesupply.com/blog/ or http://arboristblog.com/. They can be reached at 360-563-2700.