SNOHOMISH, WA: Big Trees Inc., (https://bigtreesupply.com/), a tree sales and transplant company in the Seattle area, recently replaced a significant hedge between two properties that had been lost during an accident. 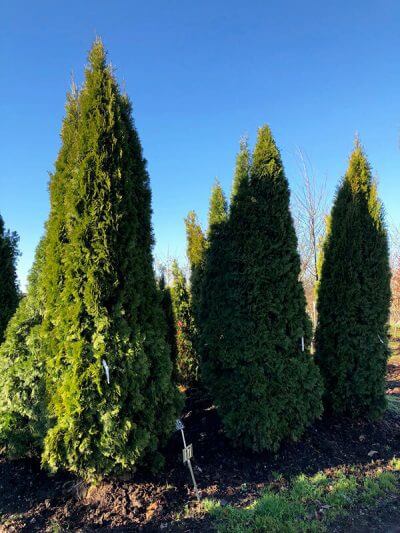 Big Trees was approached by a customer who had a major accident occur with their neighbor, resulting in a lost hedge between the properties. The client’s neighbor had recently run a power cord along a row of tall Arborvitae trees to get some lighting into the daughter’s playhouse. Unfortunately, the Arborvitaes caught fire and the fire spread quickly throughout the entire 65-foot long hedge. The fire was exceptionally close to both residences, but fortunately, neither home caught on fire.

The trees needed to be replaced as soon as possible and Big Trees had the inventory of trees and the crew capable of performing the work. It was decided that 31 of Big Trees’ 11’-12’ Emerald Green Arborvitaes would be the trees to work with. All of the debris from the fire was cleared, and the stumps and root material was removed from the relatively slender planting bed between the properties. The new trees were installed.

Todd Holmes, Big Trees’ Operations Manager, said: “The new trees were installed on the boundary bed, and the owners were thrilled. After the accident and thinking they would have to restart with small trees, they were thrilled to realize that their hedge could be put back in place and that the two neighbors could go back to their lives, hopefully with some better extension cords on their future projects.”

Nancy Penrose is the owner of Big Trees Inc., located in Snohomish, WA in the Seattle area. The company is one of the largest tree nurseries in the Seattle area with over 120,000 trees available in over 300 varieties. They not only deliver young trees, but also mature trees in a wide range of sizes. Some types of trees available include spring flowering, deciduous, evergreen, and privacy trees. The company also does tree transplanting including large trees. Their blog can be seen at https://bigtreesupply.com/blog/ or http://arboristblog.com/. They can be reached at 360-563-2700.