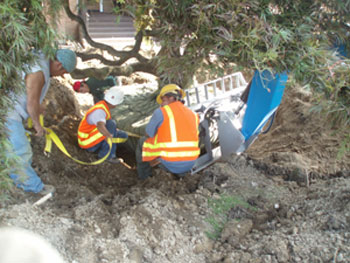 Root rot is one of the most serious types of big tree diseases. The health of a tree with root disease will deteriorate over time until the tree eventually dies. The rot, which can also affect the butts of big trees, is usually caused by fungi.

Root rot is typically found in older trees or trees with damaged roots. Trees with root rot often have dieback, leaf loss and leaf discoloration. The tree’s growth is also stunted by the rot, both in height and diameter.

The three most serious types of root rot that can be found in Pacific Northwest trees are Annosus root rot, Armillana root rot and Laminated root rot.

Annosus rot is a fungus-based root disease. It affects many different types of big trees, including the western hemlock, mountain hemlock and white fir. Sometimes pines such as the western white pine, ponderosa pine and lodgepole can also contract the disease, as well as larch, spruce and Douglas fir. The fungus causes reduced growth, root and butt rot and tree death.

Certain types of trees with Annosus root rot will have a yellow and thinning crown. The tree’s cones will also look unhealthy. At the beginning of the infection, the fungi appears as a reddish-brown stain inside the butts and roots. As the disease progresses, the wood will become streaked with brown lines and small white flecks will appear on the surface of the inner bark. Sometimes pockets of white fibers with black specks will appear on the roots. In advanced stages of the disease, the bark will have white streaks and black flecks in areas of the wood that have become decayed. Armillaria is a root disease that, like Annosus rot, affects many different types of trees including oak and dogwood. The disease is caused by a white-looking fungus that infects the wood. It spreads through root contact and infection from spores.

The fungus typically enters the tree through a wound, and grows into the roots. In trees infected with ARR, the fungus will appear between the tree’s bark scales and as stringy white and tan growth (called conks) on the base of the tree. Many times the tree will show no visual indicators of ARR for two to six years after infection and when at least half the root system has become infected.

The most serious type of root rot in the Pacific Northwest is laminated root rot, also called yellow ring rot. Laminated root rot can infect hemlocks and firs, as well as the western red cedar, larch and spruce trees. Pines can generally either tolerate or resist the infection.

Laminated root rot, a fungus infection, spreads when a diseased tree comes in contact with a healthy tree. Roots are either destroyed over a period of time causing the tree to uproot or fall during windy conditions, or the tree loses its ability to absorb nutrients and water. Small trees will die quickly from laminated root rot, while older big trees can last decades with the infection.

Signs of root rot include yellow crowns, thinning leaves, a reddish-brown stain on the central core of the tree and annual rings that separate.

If you are planning on buying a tree or transplanting trees, contact a big tree specialist to find out how to prevent root rot. Discussing tree diseases with a professional tree nursery experienced in landscape trees can help you avoid costly tree replacement later on.